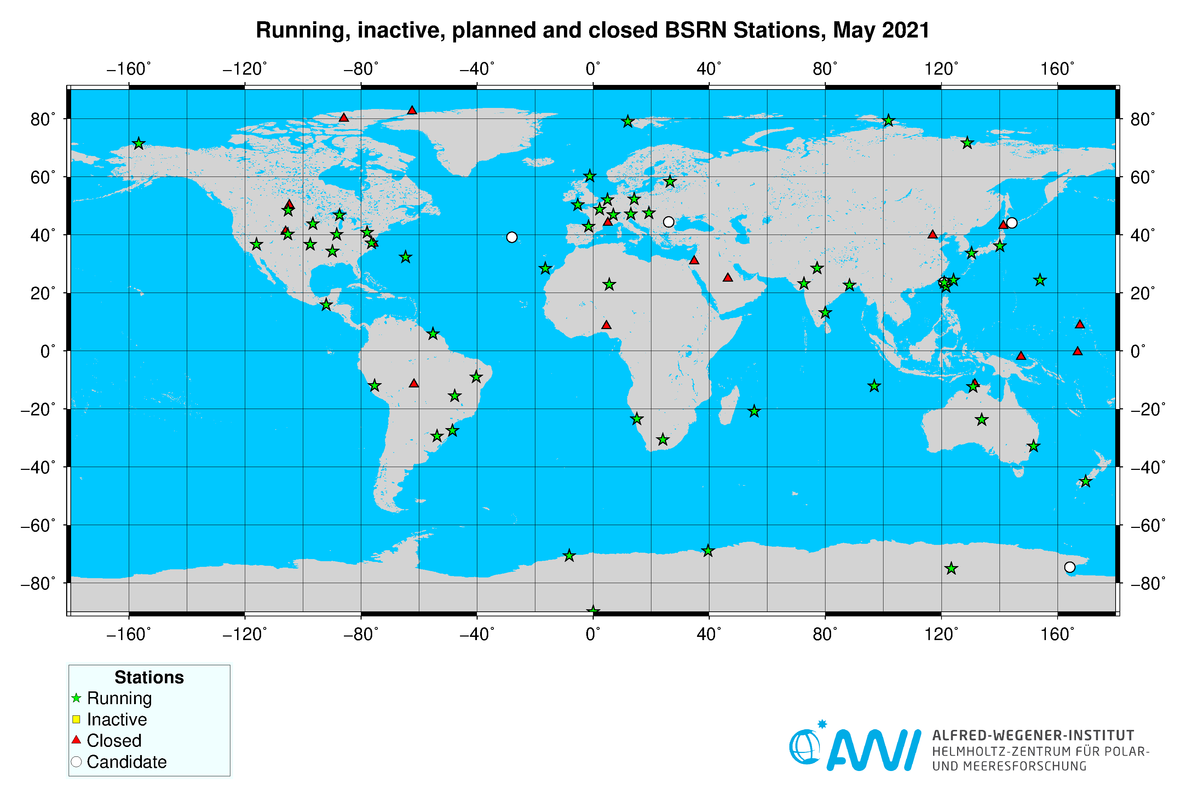 The BSRN was conceived and implemented in the late 1980s by the World Climate Research Program (WCRP, sponsored by WMO, ICSU, and IOC), with the collected data intended to be utilized for climate research applications; in particular, satellite product validation, climate model comparisons, and establishment of regional radiation climatologies, all in support of earth radiation budget studies. In the mid 1990s, BSRN was included under the WCRP program called The Global Energy and Water Experiment (GEWEX). By the late 1990s, BSRN was designated as a contributing network of the WMO Global Atmospheric Watch (GAW) Programme, III-6 and in the early 2000s was designated as the Global Baseline Surface Radiation Network of the Global Climate Observing System (GCOS).

BSRN closely links to NDACC in that atmospheric composition is a primary determinant of the non-geometric variability of the surface-received irradiances observed by BSRN. BSRN encourages nearby simultaneous observations of UV radiation, spectral irradiance, aerosol optical depth, water vapor, and ozone measurements at its sites. Many of them provide upper air soundings to the archive as complementary information to basic broadband irradiance measurements (https://dataportals.pangaea.de/bsrn/).

Irradiance data collected and provided by the BSRN derive from instrumentation and operating practices that fulfill specifications developed by the BSRN community, intended to provide the highest possible quality irradiance data from continuously operated field sites. Each participating site has a designated Site Scientist, who is responsible for the operation of the site and the quality of the final data product submitted to the central archive at AWI.

To fulfill its institutional obligations to respond to the broader climate/scientific community, the BSRN project manager (https://bsrn.awi.de/contact-persons/) reports annually to the GEWEX Data and Analysis Panel (GEWEX-GDAP) and the GCOS/Atmospheric Observations Panel for Climate (AOPC). The current project manager and deputy of BSRN are Dr. Christian Lanconelli (EC-JRC) and Dr. Laura D. Riihimaki (CIRES-NOAA) who provide the overall international management of the BSRN. The AWI BSRN Archive (also called the World Radiation Monitoring Center) is under the direction of Dr. Amelie Driemel. All data are interactively available for any scientist who accepts the data release guidelines. A biannual BSRN Scientific and Review workshop is organized to keep track of the network status, review the scientific achievements and consider new site affiliations. All presentations and the final WCRP BSRN workshop reports from the meeting are available at https://bsrn.awi.de/meetings/.

BSRN sites are typically sponsored by the host country's national government or, in some cases, other public or private institutions. The sites’ participation in BSRN is generally considered part of the countries’ contribution and obligation to the UN and other international sponsoring organizations.